In June, Art & Ag artists visited over 400 continuous acres of sunflowers at Elkhorn Basin Ranch.  When they last visited Elkhorn Basin Ranch in 2018, it had just begun to recover from a devastating flood that ruined 90% of their mature walnut orchards. Now, three years later, sunflowers represent a rebirth for the farm. And what a rebirth it is! Rows of flowers as far as the eye can see from the levee to the east all the way to the western perimeter of the property. Farm manager, Ricardo Garcia describes it as “a world of sunflowers.”

Ricardo and his father Jose nearly gave up after the flood. But they made a decision to carry on and to replace the walnuts with rotating row crops. “After what my father and I have been through it’s exciting for us to start something new. There’s a lot of work to it but sunflowers have a quicker turn around – we plant in March and harvest in August/September. 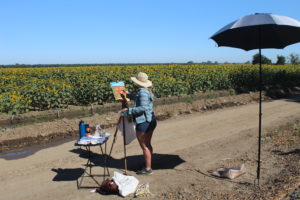 “The early morning is a great time for artists to come out. “Sunflowers really do follow the sun and it will be in a perfect spot this time of year with the sun behind the artists and the sunflowers facing them,” says Ricardo. 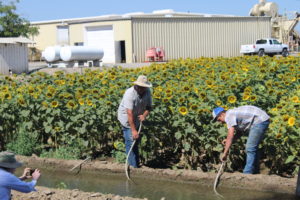 Sunflowers are in good care on the restored Elkhorn Basin Ranch owned by the Yolo Land Trust and leased to Don Beeman and to Garcia Farms. With the ground now in row crops there is also now a  sophisticated drip irrigation Don Beeman has installed for better water conservation on the farm.

Special thanks  the Garcia family, Don Beeman, and Art & Ag Project partner,
the Yolo Land Trust, which has one simple and vital mission: to conserve farmland in Yolo County.