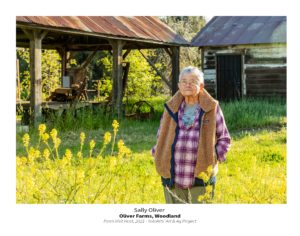 Art & Ag’s visit to Oliver Farms was like stepping back in time to a place that tells the story of the farm long before Sally Oliver moved there over half a century ago.

Born and raised in Woodland, Sally married her husband George right out of high school. When George returned from the Korean War, he and his family purchased the farm and Sally recalls,”we got this beautiful historic home.” The two-story house was built in 1902 by the Lowes family who raised horses which were sold to the San Francisco Fire Dept. The house is on the Yolo County Historic Resource Survey and you can still see the original horse and buggy path in front of the house from the turn of the last century. 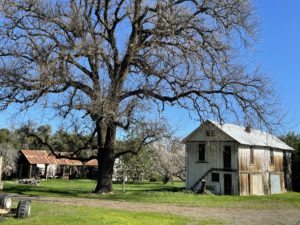 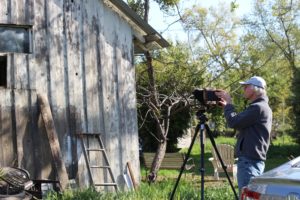 Other buildings include a bunk house “where the hired hands slept and earned $1 a day.” The tank house-where the well still sits- an almond processing barn, tractor barn, and a variety of old farm equipment dots the landscape. All of these structures are surrounded by what remains of the original grove of olive trees and native oaks.

At one point, the land was covered with almond trees and farmed by Sally and her husband as part of a larger family operation, while raising four daughters in the historic house. And for 20 years Sally travelled to the San Francisco Ferry Building where she was known as the beloved ‘Nut Lady’ selling their Yolo grown almonds, walnuts and pistachios.

The almond trees are now long gone, and her husband passed away two years ago. She now leases the land to Colin Muller who transformed it into a certified organic farm, producing radish seeds and curly chard among other rotating row crops. “The gift of this rich ag land that Yolo County has should be so honored,”says Sally, “It’s got rich soil and water – that doesn’t happen in very many places in the world.” 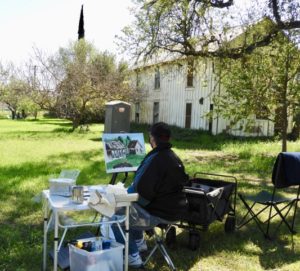 Sally is also a landscape painter who has participated in Art Farm throughout the years. That’s one reason for her to welcome artists onto her land. But there’s another: the future of her farm is now in doubt. A flood protection project would build a proposed levee which will cut through the middle of her property “making the land impossible to farm,” she says, “It will eliminate my income.” She and her family are fighting the project and its eminent domain over her property, but success is by no means assured.

Sally wants artists to visit her property now so that they can archive its beauty through their paintings and photographs. “I’d like the artists to see it through their own eyes, and to feel nurtured by its history.”